In September last year I made a post about one of the names given by Indian writer Amitav Ghosh to the island of Mauritius. According to the author of the novel Sea of Poppies, the indentured labourers migrating from India to Mauritius called the island “Mareech”. This has not been found anywhere that wasn’t one way or the other connected with Ghosh’s book, and a young friend who is currently studying anthropology in a North American university and who worked as a student at the Aapravasi Ghat said that he, too, hasn’t found this denomination anywhere else.

Maybe Mr Ghosh made it up? In any case, it doesn’t matter too much, for reading his books is always a pleasure.

I recently bought the second volume of the trilogy and I read it during the end-of-year break. Its title is River of Smoke and, though most of the action takes place in Canton, the book starts and ends in Mauritius. 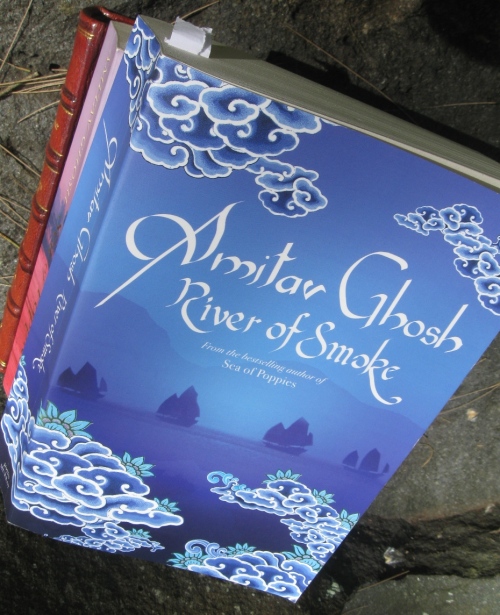 Maybe the author didn’t spend much time in Mauritius. Maybe he didn’t expect to have many Mauritian readers either. Whatever the case may be, there are a few things here and there that sound fairly amusing to the ordinary Ma.r.tian who sets eyes on this book. A few examples, starting with the very first sentence:

« Deeti’s shrine was hidden in a cliff, in a far corner of Mauritius, where the island’s eastern and southern shorelines collide to form the wind-whipped dome of the Morne Brabant. » (Page 3.)

Then, still about Le Morne:

“This community of fugitives – or marrons as they were known in Kreol – had lasted until shortly after 1834, when slavery was outlawed in Mauritius. Unaware of the change, the marrons had continued to live their accustomed lives on the Morne – until the day when a column of troops appeared on the horizon and was seen to be marching towards them. That the soldiers might be messengers of freedom was beyond imagining – mistaking them for a raiding party, the marrons had flung themselves off the cliffs, plunging to their deaths on the rocks below.” (Page 10.)

“Deeti was no less fearful of the mountain than any of the others, but unlike them, she had a one-year-old to wean, and when rice was scarce, the only thing he would eat was mashed bananas. Since these grew in abundance in the forests of the Morne [?], Deeti would occasionally screw up her courage and venture across the isthmus, with her son tied to her back. This was how it happened one day, that a fast-rising storm trapped her on the mountain. By the time she became aware of the change in the weather, the tide had already surged, cutting off the isthmus; there was no other way to return to the plantation so Deeti decided to follow what seemed to be an old path, in the hope that it would lead her to shelter.” (Page 10.)

Obviously Amitav Ghosh loves to play with languages, and as such we cannot but like him. In this first part of the book he seems to enjoy using “Creole” words, sometimes to amusing effect:

“Always the first to rise, she would go tap-tapping around the wood-floored bungalow, cane in hand, trumpeting a reveille in the strange mixture of Bhojpuri and Kreol that had become her personal idiom of expression: Revey-té! É Banwari; é Mukhpyari! Revey-té na! Haglé ba? » (Page 4.)

“Just before the last and steepest stretch of the climb there was a convenient clearing where everyone would stop, not just to catch their breath, but also to exclaim that the manifik view of the jungle and mountain, contained between two sand-fringed, scalloped lines of coast.” (Page 4.)

“Within a few minutes she’d be snapping at everyone: Levé té! We’re not here to goggle at the zoli-vi and spend the day doing patati-patata.” (Page 5.)

“To complain that your legs were fatigé or your head was gidigidi was no use; all you’d get in return was a ferocious: Bus to fana!” (Page 5.)

“Procrastinators would feel the sting of Deeti’s cane: Garatwa!” (Page 5.) 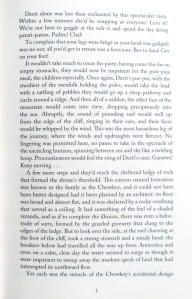 “But only a Hindi-speaking etranzer would think in that vein: any islander would know that in Kreol the word ‘chowkey’ [?] refers also to the flat disk on which rotis are rolled (the thing known Back There as a ‘chakki’).” (Page 6.)

“Then, after offering up handfuls of arati flowers and swallowing mouthfuls of tooth-tingling prasad, the children would scamper back to the Chowkey, to be met with cries of: Átab! Átab! – even though there was never a table to eat off, but only banana leaves […].” (Page 7.)

“The staples were parathas and daal-puris, and they were eaten with badjis of pipengay and chou-chou, ourougails of tomato and peanut, chutneys of tamarind and combara [?] fruit, and perhaps an achar or two of lime or bilimbi, and maybe even a hot mazavaroo of chilis and lime – […].” (Page 7.)

“Kisa? the chutkas and chutkis would cry, pointing at this figure or that: Kisisa?” (Page 13.)

“Bon-dyé! she would cry; are you a fol dogla or what? Don’t be ridikil: the whole thing, from start to fini took just a few minits, and all that time, it was nothing but jaldi-jaldi, a hopeless golmal, tus in dezord. It was a mirak, believe me, that the five managed to get away – (…).” (Page 14.)

“Me, when Jodu let me out and I came on the deck, I thought vreman I’d lost sight. It was so dark nothing was vizib, except when when the lightning flashed – and tulétan the rain, coming down like hail, and the thunder, dhamak-dhamak-dhamakaoing as if to deafen you.” (Page 15.)

“Dyé-koné, you can imazinn how this news affected us all and the grand kankann that was caused, with the lascars lamenting the death of Serang Ali, the girmitiyas mourning for Kalua, and Paulette weeping for Jodu, who was like a bhai to her (…).” (Page 17.)

“Agobay! Too many questions – do you want to make him fatigé, kwa? He’s here for a konzé, na, not to do palab and panchay with you. Stop all this bak-bak and katakata – go and eat your parathas.” (Page 24.)

Despite a few oddities, River of Smoke is a good book to read. Though packed with a variety of languages, it has fewer incomprehensible words than the previous volume. But it’s a pity that among all the local words Amitav Ghosh put in the mouth of his characters he kept paratha instead of turning it into a farata.

Martian and foreign readers and commenters
are welcome to express all their views
about what has been written in this book.